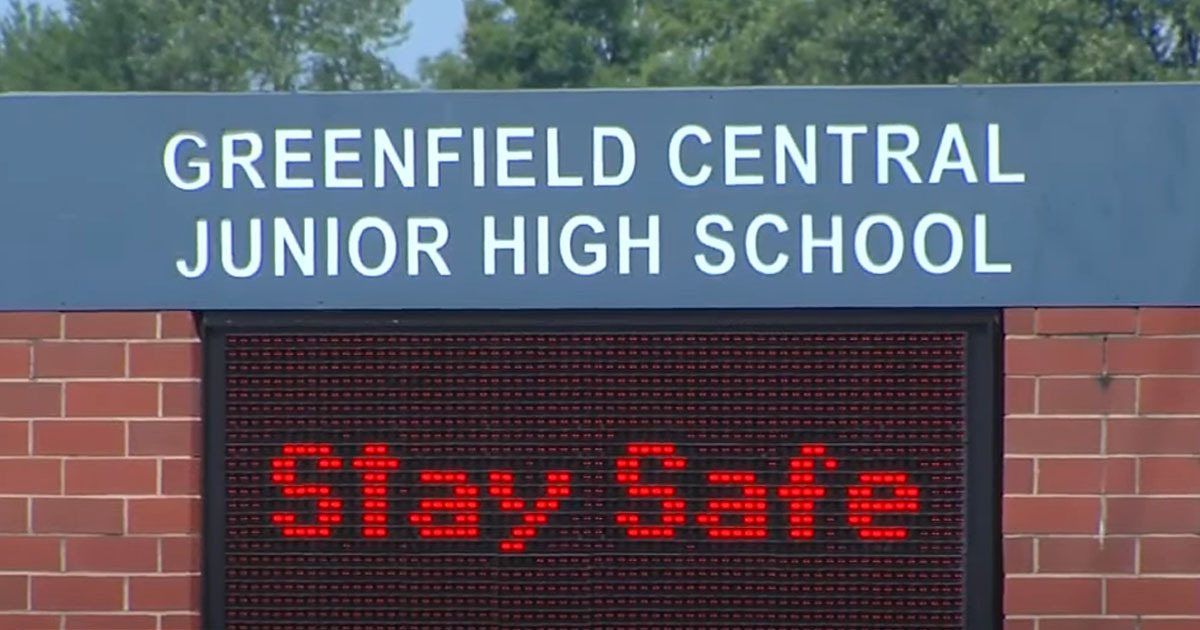 A junior high in Indiana is under scrutiny as the family of one of its students sent their child to school on its first day of the Fall term even though the results of a COVID-19 screening were still pending.

The student indeed received a positive result sometime Thursday, and the health department notified Greenfield-Central Junior High in Greenfield, Indiana, which in turn notified students and faculty that afternoon in an email. As part of the district’s “Positive COVID-19 Test Protocol,” the school quickly isolated the student, and extra care was taken to disinfect rooms he or she may have been in. The student’s schedule was examined and everyone seated within 6 feet of the student is now required to quarantine for 14 days before returning to school. (Because you know children always sit still in exactly the place they were assigned – I’m sure the rest of the class is fine.)

When interviewed Thursday evening, Harold Olin, superintendent of Greenfield-Central Schools, said, “Tomorrow we will carry on. Obviously we will have fewer students with us, but we’ll continue with what we’re doing.”  Students did return to school Friday, and all systems were a go by Monday morning, when all but the aforementioned students returned to their regularly scheduled classes.

Greenfield-Central Junior High is located in Greenfield, Indiana, about 30 minutes east of Indianapolis. It serves about 750 students in grades 7 and 8. It has an impressive rating on Greatschools.com overall, citing average or above-average standardized test scores. Approximately 95% of the student body is white.

The school’s website makes no mention of the exposure.

The CDC recently posted new guidelines for schools reopening in the wake of COVID-19, whether in the next few weeks or few months, and the reactions are overwhelmingly negative.

That is what makes your child’s school sound like prison? Not the forced isolation in rooms, and limited socialization? Not the penalization for talking out of turn? Not the mediocre food served on styrofoam trays? Not the complete elimination of constitutional rights once enrolled?

No one knows just how much schools will be expected to observe these guidelines as they reopen. No one knows what it will look like, but it’s sure to be different across states (Wyoming schools, for instance, will implement things far differently than, say, New York), and even across counties. But if these guidelines are what convinces parents that schools are indeed prisons for children, they’ve served an even greater purpose than promoting social distancing.

CDC Activities and Initiatives Supporting theCOVID-19 Response and the President’s Plan for Opening America Up Again, May 2020

No matter where you stand on the topic of coronavirus and its infiltration into our way of life, and life itself, there is no question that it has dramatically changed the way America is living, working, and schooling.

With the push to shut down all non-essential services, schools were among the first to close (perhaps, as many have claimed, signifying that they aren’t as “essential” as originally perceived), with the exception of New York City, which held out as long as possible even as the world around them burned, not because schools were providing for the education of children, but because many underprivileged in New York practically live there and depend upon them for nearly everything.  But even New York eventually capitulated, and the country, for better or for worse, has gotten a taste of what home education looks like.

While it’s true that many families are being forced to “homeschool” in the most literal sense of the word, what many people are calling “crisis schooling” or at the very least “public school at home” does not in any way resemble what most true homeschools do on a daily basis when not confronted with a pandemic. The stress of constantly being at home, coupled with deadlines, new apps to master, meetings, and countless assignments presided over by harried parents who are juggling childcare, work responsibilities, and other household tasks has left many families feeling burned out before they have even really begun, and one has to wonder how much learning is actually taking place at all. It’s no wonder that President Trump is asking states to consider reopening schools before summer, and the economy is only half of the argument.

With every family struggling to hang on and continue schooling during the pandemic, there’s another family that is giving up. “I’d rather have him watch classic Godzilla movies and play in the yard and pretend to be a Jedi rather than figure out basic math,” one mother said of her frustrated kindergartener (most long-term homeschoolers agree that formal schooling for kindergarten is unnecessary and that play is precisely what they need at that age). Many school districts are implementing a lax grading policy, exercising leniency with assignments and deadlines. California is considering beginning the new school year as early as July to help make up for lost time.

But despite what The Washington Post and Harvard have to say, true homeschooling does not have to equal deprivation, for children or their parents, and certainly not for society. Homeschooled children consistently outperform their peers in academics and social situations. Universities are by-and-large happy to have homeschoolers join their ranks, and many have alternate pathways to admission, for those who don’t have an accredited diploma or traditional transcript. Homeschoolers are used to free-time (it’s amazing what can be accomplished without all the needless busywork, and pandering to political correctness), and many can use it wisely in the pursuit of valuable hobbies or skills that could be used in their future careers.

One thing remains certain: most of those who were homeschooling before this pandemic hit are suffering just as much as their public schooled peers. Their regular haunts -museums, libraries, parks, friends’ houses, co-ops, playgrounds – are all closed. Most will acknowledge that true homeschooling is more like world-schooling, with only a small portion actually taking place at home.

Children in a Philadelphia charter school have been consuming water from drinking fountains with astronomically high levels of lead, possibly for years, and parents are only now becoming aware of the issue.

Frederick Douglass Mastery Charter School, which serves approximately 750 students in grades K-8, (of whom nearly 100% are black and fall below the poverty level) has had issues with its water for over 15 years, but nothing has been done aside from occasionally taking the affected fountains out of rotation for a while. Parents were finally notified of the issue recently, and they are understandably upset.

The most recent tests on drinking fountains at the school, conducted by the district in compliance with a new city ordinance, showed water concentration levels of lead that reached upwards of 3500 ppb (parts per billion); the accepted maximum is around 10 ppb, although most medical professionals will agree that there is no amount of lead that should be acceptable in drinking water. All this while teachers report that there have been, for an untold number of years, special coolers with water designated for the teachers, because on some level it was understood that the fountains did not deliver water that was acceptable to drink.

Consuming high levels of lead, especially in children, has been attributed to lower IQ scores, increased incidence of ADHD, and other developmental and behavioral problems. The FDA sets the standard for lead concentration of drinking water at 5 ppb, while the EPA remains more conservative at 15 ppb.

Frederick Douglass Mastery Charter School is among 18 schools in the Philadelphia area operated by Mastery Charter School. The building itself was built in 1938, and until 2010 was under control by the School District of Philadelphia. As early as 2000, however, drinking water tests at the school have shown lead levels higher than what is deemed acceptable, and have consistently been swept under the rug.

The district admits that the maintenance backlog is so extensive that fixing the problem just isn’t possible, citing other issues in crumbling Philadelphia schools such as HVAC malfunctions, asbestos, and chipping paint.

On Frederick Douglass’s home page a quote from a parent features prominently:

“I just love the communication between
the parents and the teachers and the school.”

One has to wonder if this parent is now eating their words, after realizing the school has been keeping parents in the dark about their children’s health and safety for years.

‘Help me understand why this is justifiable’ — From leaking roofs to lead-coated pipes to insulation covered with asbestos, here’s what it’s like inside some of Philadelphia’s crumbling public schools pic.twitter.com/l8izsmPYvs

Lead Toxicity – What Are U.S. Standards for Lead Levels? – CDC.gov